Filling out forms is a necessary evil whether it’s on the web, mobile apps, work-related systems, or even on old-fashioned paper. We don’t enjoy doing it but sometimes there’s no other option.

Why are forms such a chore? Designers from multiple industries have been trying to solve this problem for decades. Indeed, every layer of the experience when we use a computerised form has been meticulously crafted to reduce our stress – from the ergonomics of the keyboard & mouse to interaction components like dropdowns, radio buttons and auto-completed text fields. But the fact remains that they’re a stressful part of our everyday lives.

A recent example of design being used to ease the pain of forms is Funnel, a survey tool for iOS and Android. 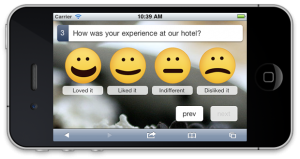 Funnel uses an approach designers commonly take to the form problem, which is to make the process feel more fun and playful in the hope that users will warm to it. What’s the rationale behind this approach? Is it really more fun to fill out forms that are designed like this? 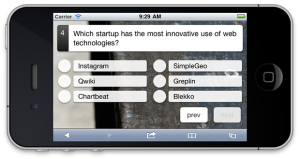 The interaction models are pretty conventional, just designed in a way that makes them less intimidating (assuming you aren’t intimidated by large smiley faces, of course). While this layer of design might be dismissed as superficial by people who focus on functionality, it definitely matters. The visual layer provides users with a subconscious cue as to the type of activity they’re about to undertake, and this will in turn affect their emotional state as they embark upon the activity.

Imagine two different signup forms, both asking for the same set of personal information, except one has been designed for a mortgage application process and the other for a music-oriented social networking site. They might even use the same set of interaction models – dropdowns, calendars, radio buttons – but we’d be surprised if the visual execution was identical. The mortgage provider should use visual design to convey an appropriate level of seriousness; after all, entering the wrong information may lead to rejection, or might count as fraud in extreme cases. However, this level of seriousness would seem oddly intimidating in the case of the social networking site. 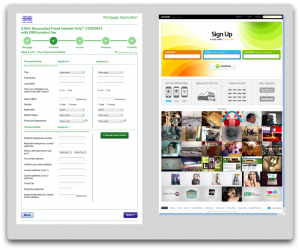 Guess which one of these forms is a mortgage application

But is it enough to focus purely on the visual execution of forms, as Funnel seems to do, if we want to make them less painful? The visual, aesthetic layer design is slightly problematic in that it’s very culturally sensitive. A design that suggests playful informality in one part of the world might seem downright childish in another. This layer is also very subject to changing trends – a visual style that seems contemporary one year might become dated and corny very quickly. So perhaps it’s time to tackle the problem of forms at a deeper layer than purely visual design.

What are forms for? To gather information from users. Do we always need highly specific and granular data? No. Are we still dependent on keyboard, mouse and touch inputs? No. Can new devices and the data they can gather fundamentally change the form-completion process? Maybe.

Imagine a mobile form that works like a theremin, where the user lifts their device to change the value of a field, or tilts the phone to give a thumbs-up or thumbs-down. Imagine a restaurant whose mobile app gathers feedback not with a slider, but by having customers express themselves with a smile or grimace and then taking a photo and algorithmically “scoring” their satisfaction. Imagine a rail company using location data to invoke a customer satisfaction survey when a journey ends, referring to timetable data to work out if the train was late and pre-populating the form as appropriate.

Some of these ideas may be less far-fetched than they sound at first. For example, the Happy Things project for Mac OS detects when you smile and automatically takes a picture of your face. It’s becoming easier for software to gauge our emotions as well as our location.

There’s a lot of scope for innovation in the way systems gather input from users, especially where mobile devices with richer contextual awareness are concerned. The process can become more powerful as well as more playful, as long as we continue to challenge ourselves as an industry and as designers. Why not exploit these capabilities instead of – or as well as – making checkboxes feel nicer?